Pro-E-Bike, co-financed by the Intelligent Energy Europe Program, aimed to promote and disseminate clean and energy efficient vehicles (bicycles and scooters) for delivery of goods and passenger transport among private and public bodies such as delivery companies, public administration and citizens in European urban areas. Project partners created favorable conditions for market development by building awareness and raising confidence in the E-bikes among target groups.

Pro-E-Bike obtained a sensible behavioral change: in fact, 4 over 5 tested e-vehicles have been kept in use by pilot companies involved in the pilot.

Poliedra provided information about current situation and best practices concerning the use of e-bikes in Europe and was in charge for the Genova Case Study that involveed actively the Municipality, the Province and three companies (TNT-express Italia, Ecobike Courier, Grafica KC). For Milano pilot, data concerning GLS deliveries in the central part of the city have been collected and analyzed.

Genoa
During 6 months of pilot, TNT e-scooter delivered more than 10,000, covering more than 3,500 km assessing that an e-scooter can replace a traditional scooter without any performance decreases.
The e-cargo bike of Eco Bike Courier, in Genova, delivered more than 400 parcels and bulky boxes for a total weight of 2,000 kg, covering around 1,500 km. Grafica KC, the ecological typography, realized good performances before Christmas, delivering, with their e-cargo bike, 80 orders and 240 kg only in December.

Milan
In Milan, during the 10 months of the pilot, GLS delivered almost 50,000 letters and small parcels, covering more than 20,000 km with their pedal assisted bikes. In May 2015, GLS inaugurated a new e-vehicles logistics platform, dedicated to Milano city center, with e-bicycles and e-vans. 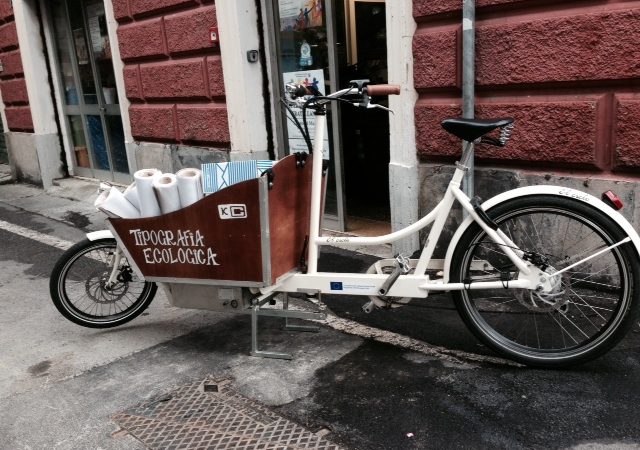